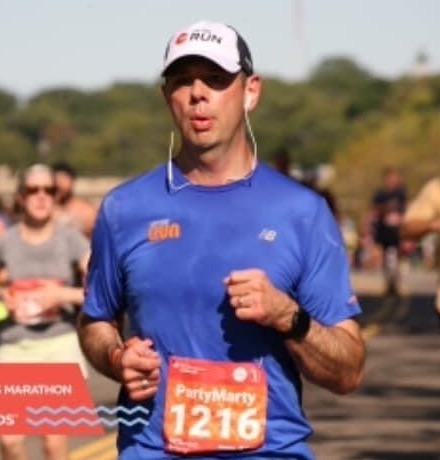 My name is Marty Otten and I have been an avid distance runner since 2005. I honestly had never really run before 2001 and tried a Turkey Trot on Thanksgiving morning. The overall feeling of an organized event and the cheering really excited me. That led to several years of going greater distances until I ran my first Twin Cities Marathon (TCM) in 2005. I initially ran the marathon distance as a bucket list item, but I realized as I crossed the finish line that there were many more to come. When I am not running, I am a technology leader for Optum / United Healthcare where my team delivers the back-end components for how we manage healthcare plans. Prior to that, I was in retail with experience at Target corporation for 15 years and a few other smaller retailers. When I am not running or working, I enjoy spending time, camping and traveling with my family. My wife and I have two children who are now college bound which allows me additional time to give back to the things I love.

I initially ran and trained solo for 10 years, until 2015, when I found the Lifetime Fitness group that ran out of Plymouth, MN. I formed quick connections with the group and ended up becoming a coach for Lifetime, that same year, as the group trained for the 2015 TCM. This helped me realized that I had been missing out on the community aspect and my ability to give back to the running community. I continued that role of being a part time run coach for Lifetime until the pandemic hit in early 2020. At that time, a total of five us (myself and four other friends) started a group called the Bohemian Runners. This started from one organized event and ended up being an informal group of passionate runners that trained together and put on several events to help keep our runners excited throughout the pandemic. We helped organize training runs, plans, and weekly emails to help a group of runners train for Grandma’s full / half as well as TCM and the 10 miler. That group continues to operate going forward.

With my background and passion for running, I feel like I could add value to Run Minnesota by understanding the importance of customer experience, technology, and I know what runners are looking for in their community. Although our events and group of runners is small and organic, I would say they are representative of the entire MN / Twin Cities running community and gives me insight to how best serve this group. The mission of Run Minnesota speaks to me, and I want to continue to give back to the broader running community. Specifically, around being an advocate for runners of all ages and abilities. I often encounter people who say, “I’m not a real runner”. If you run, you are a runner…. regardless of distance. That is something our group of Bohemian Runners truly believes and excited to be part of a broader group that believes the same. I am more than willing to help out where I can best serve the group and where the most help is needed.