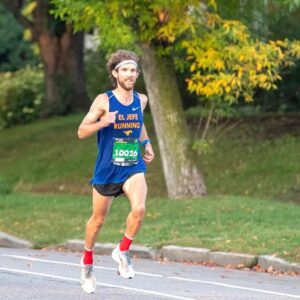 Danny Docherty is an elite runner, coach, and the new Run Minnesota Program Director . A native of St. Paul, MN, he attended Loyola University Chicago where he ran cross-country and track and field at the Division I level and graduated with degrees in English and Psychology.

He first competed as a runner at Cretin-Derham Hall High School where he found he had a knack for the sport after qualifying for the State Meet on six different occasions between cross-country and track and field. He went on to become a 2x All-State award winner as a senior in the 1600m and 3200m.

In college, he experienced both success and failure during his time at Loyola Chicago. His major accomplishments include qualifying for the NCAA West Prelims in the 10000m as a senior and achieving All-Conference honors in cross-country and track. He was also a member of a team that finished second at the Horizon League Indoor championships during his senior season. He currently ranks as the #2 All-Time performer in the 10000m at Loyola.

After college, Docherty acquired his USATF Level 1 certificate almost immediately upon graduating. He entered the coaching profession in 2014 as an assistant at his alma mater, CDH. He learned the ins and outs of being a coach and one major highlight was coaching a Girls 4x400m Relay Team to a 3rd Place finish at 2017 State Meet.

Outside of coaching, Docherty has had a range of jobs since college, from working the sales floor at Run N Fun, to delivery driving and substitute teaching.Docherty has continued to compete after college and pursue his goals as a runner. He started out on Team USA Minnesota in 2014 before moving on to Run N Fun from 2015-16 and then back to Team USA Minnesota as a training partner in 2017 and eventually became a full-time member in 2019. He was the USATF Minnesota Runner of the Year in 2019 and qualified for the 2020 Olympic Trials on 3 separate occasions in 2019. He finished 7th at the USATF 25k Championships in 2019, finished 3rd at the 2019 Twin Cities Marathon and recently won the 5k, 10k, and 10 Mile races during the 2021 TCM Weekend.

Docherty has recently stepped away from the professional side of the sport to pursue his career goals which include growing his personal coaching business, Docherty Coaching, and working toward his Master’s in Education at the University of Minnesota in Sports & Exercise Science. He is also aiming at qualifying for the 2024 Olympic Trials and continuing to race and train at a high-level.

Docherty is currently in his sixth year as the Director of Operations for Track and Baseball at the non-profit organization Highland Groveland Recreation Association (HGRA) in St. Paul. He is also entering his third year as an assistant coach at Visitation HS for track and DeLaSalle HS for cross-country. Docherty currently holds Level 2 coaching certifications from USATF (Youth Specialization), USTFCCCA (Endurance Specialist) and the Lydiard Foundation.

As a whole, he is passionate about helping others reach their goals and building community in the process. He has learned the coaching trade over time through his own running, working with coaches and athletes from all levels, and continuing to pursue education and stay updated on the latest in the sports and exercise science profession.