This Article Is Sponsored By 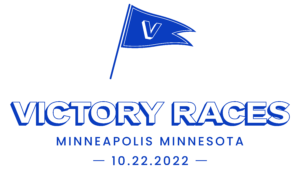 Course-Records Crushed at City of Lakes Half

As a rising sun reflected on the still waters of Lake Harriet, people amassed on the lake’s western parkway road. Some who stood off to the side wore sweatshirts in the 55-degree air, but most donned fast shoes, short shorts, and race-team singlets with numbered bibs. They stretched in the park, stood in line for one last bathroom break, and completed their last strides before the 8 a.m. start of the eighth in-person Jeff Winter City of Lakes Half Marathon, a storied local race that was first run as a full marathon in 1975.

An hour and a few minutes later, the men’s and women’s course records fell as a current professional runner, and a former pro took advantage of near-perfect weather to complete two figure-eights around Harriet and Bde Maka Ska.

Tyler Jermann, a professional runner with Minnesota Distance Elite, split from the field of nearly 1,100 runners right away and won in 1:04:30. He ran with a sizable lead and said afterward that he is happy to be listed with the legends in the race’s past.

“I love racing here; there’s a lot of good energy in the Twin Cities,” he said with a wide grin.

“City of Lakes Half Marathon is a hard course, so the time doesn’t always translate to other courses. I’m happy with a minute improvement over last year. And yeah, getting the record is fun.”

Being happy and having fun on the course also described the woman’s winner: Heather Kampf. The four-time US National Championship One Mile runner makes her recognizable to many Twin Citizens and running fans.

Although the 35-year-old Minneapolis resident has called herself retired (her wins were in 2012, then ‘14–’16), she blazed ahead of Sunday’s competition from the start. She locked in her pace with the men, smiled and waved at the crowds, then kept moving up as she shifted gears in the final lap of Bde Maka Ska to a 5:27-minute-per-mile pace.

Kampf’s 1:13:19 course-record sprint around the lakes earned her first-place for women and 16th-place overall.

“Between a new lifetime best in the 5K a couple weeks ago and a new course record for this half…I’m enjoying every opportunity to surprise myself,” Kampf wrote on social media after the win.

“I love racing here; there’s a lot of good energy in the Twin Cities,”

Behind her, Maria Langholz was running her first half marathon in more than a decade and cruised to a second-place finish. She PR’ed in 1:17:58—a time that aligns with her recent speedy marathon. The 30-year-old communication director for Demand Progress in Washington, D.C.,  grew up in Minnesota, went to Macalester, and returned to her home state this weekend for a cousin’s wedding—and the hotfoot hometown race.

“I’m running California International Marathon in December and trying to make the Olympic Marathon Trials,” said Langholz, who just missed the OTQ at Grandma’s Marathon (she ran a 2:38:22) after a two-month-long road trip. “[Today] was ideal running weather, and it’s such a great running culture here. And it’s great to run with so many other women who are fast.”

Megan Roth is another of those fast women: She finished third for women in 1:19:21, setting her own personal record. The 35-year-old running coach and mother of one is a City of Lakes veteran who is often seen zipping along the footpaths, sometimes with a stroller. She was second in 2019 and third in 2021.

Roth is also on a comeback from a life-altering experience. While running in the 2021 Boston Marathon, she collapsed and nearly died.

“I got a little emotional when at the starting line today because this was my last race I had finished before the Boston Marathon,” said Roth, who now runs with an implanted device near her heart to detect trouble. “This is the closest I’ve been to being back; this morning has been really fun to be racing again.”

She said she didn’t put pressure on herself to PR or place this year. “I reminded myself to not push too hard. Today gives me a lot of confidence that I’ll never have to deal with [the heart issue] again.”

“Before, I wanted to keep my pace conservative because I always blow up in the second time around the lakes,” Jermann said. “But I didn’t really do that.” Instead, he started fast and kept going fast—averaging a 4:56-minute-per-mile pace. “I was steady the whole way, so yeah, I’m happy.”

The former Iowa State University runner mentioned the hills as the big challenge on the course, which runs on the rolling parkway road and not the flat pedestrian paths.

As he crested the last hill, Jermann, smiling and sweaty, looked confident cruising toward the finish en route to defending his 2021 victory. By that time, the 30-year-old had opened a two-minute gap ahead of second- and third-place finishers Danny Docherty, 32, and Connor Reck, 29.

“I knew Tyler is in good shape,” said St. Paul’s Docherty, a running coach and program director for RunMinnesota. “I wasn’t going to try to go with him.” Docherty ran shoulder to shoulder with Reck, a former Harvard track man, until surging at mile 8. Docherty finished in 1:06:53; Reck in 1:07:18.

“The crowds were great, and the energy was great out there at the water stops,” Docherty said, calling out the nearly 75 volunteers who made the event happen. “This is the perfect day—we’re lucky to have the temp drop,” he said.

Jermann, Kampf, and Erickson each earn $300 for their wins, though holding the course record probably means more in the esteemed contest. For nearly 50 years, City of Lakes has circled the urban waters for the camaraderie unique to long-distance running. From 1975–1981, the race was the major marathon in the Metro. After the Twin Cities Marathon was founded in 1982, the City of Lakes race changed to a 25K, then shortened again in 2014 to the 13.1-mile distance.

In all those early years, Jeff Winter was always behind the scenes, directing and planning. Though he passed in 2012, he was remembered at the start. His daughter Allison Winter started the race, airhorn held high, to cheers from the surrounding crowd.

“My dad was hard-working, generous, and a funny guy,” she said. “He ran a ton of marathons and had to bow out of running later in life, but stayed passionate about the running community.”

She grew up with the race as a part of her life and remembers her father being dedicated to the race. Most of the time, even as a kid, she was involved too. “Setting up cones, helping on the course, not always out of my own will,” she said with a laugh. And now she runs often as well.

Nissa Larson took over as race director for 2022’s race. She was thankful for the cool, clear morning and moved quickly between the finish line and the volunteer area, congratulating runners, checking times, and asking whether anyone had trouble with the construction near the North end of Bde Maka Ska. Two paramedics stationed near the finish line said the day was boring—which meant it was going well for Larson and everyone else.

Many older runners say that those early races prompted them to start running. Kathy Peterson caught the habit 41 years ago when she was 38. At the half marathon Sunday, she set a record for half marathon time for a 79-year-old Minnesotan woman.

“I ran it last year, but before that, I hadn’t run it for years,” said Peterson, who lives in Outing. “When I was in high school, we weren’t allowed to do any sports. So I didn’t start running until my husband quit smoking and said he wanted to run a mile before he turned 40.”

Peterson logs the miles with her friends while competing in the Ragnar and other relays. They joke with each other about their past hijinks and their dedication to their RunMinnesota running logbooks. She was one of 11 runners who set state age records for the distance.

Kampf’s time tied the record for fastest half marathon by a 35-year-old Minnesotan woman. The record is held by Katie McGregor—though McGregor’s time was set at the 2013 USATF Championship Half Marathon from Two Harbors to Duluth (a downhill course), in which she finished 11th.

Jermann, too, set a Minnesota age record for 30-year-old men, which his brother-in-law held (1:05:25—set at the 2012 Garry Bjorklund during the USATF Championships).

A Community of support

Mile in My Shoes
Latina's on the Move MN
Aaron Zappa

The official charity partner for the event, Mile in My Shoes, was impossible to miss at the race. A boisterous group wearing their blue shirts and holding dozens of signs went wild as the plodders crossed their path. Runners with the group raised $25,000 for their non-profit that encourages running as a positive outlet for people exiting incarceration, those in addiction recovery programs, and those struggling to find permanent housing.

Twenty-two runners in the masses were part of “Latinas on the Move,” a coalition motivating sisterhood in the Latina community. Adriana Barraza shouted spunky encouragement to her group members as they trucked up the parkway hill to Lake Harriet.

“I was supposed to be running,” said Barraza, who was wearing a leg brace after getting a small stress fracture. She said it means a lot to her to see her friends racing. “We want to make sure we are out, having fun, and empowering each other. Some of us had never run a 5K, and now they are out running 20-mile training runs.”

Barraza, between cheers, said she was healing up for the Twin Cities Marathon. And if her leg wasn’t ready yet? “I’m going to be there no matter what—whether I’m walking, crawling or biking.”

The anniversary of the Sept. 11 terrorist attack prompted Aaron Zappa, 27, to carry a large American flag throughout the entire race. His brother served in Afghanistan, and Zappa wanted people to remember those who fought in the war.

“I was in fifth grade when it happened,” he said. “I realized the race landed on the anniversary, and I don’t want people to forget about the terrorist attack and the war that it led to.”

The Coon Rapids resident crossed the line in 1:56:15, the flag waving high over his head.

With such a long legacy, the race is often a lock for the USATF Minnesota Team Circuit Half Marathon as well as a competition race for the Run Minnesota Grand Prix, as it was this year. Through six of the nine races on the Team Circuit (prior to City of Lakes), Mill City Running Club was leading the men’s and women’s open categories.

For the Team Circuit’s 40+ men’s category, Collegeville Track Club leads. In the 40+ women’s and all the 50+ and 60+ categories, Run N Fun Team is sweeping the field. The Molar Milers are leading for men’s 70+, while there haven’t been enough USATF-registered runners to score a team in the women’s 70+ category.